WFHB is Bloomington, Indiana's community radio station and Jason Fickel's musical interests connect with the station in many ways: as a performer, band leader, and, most recently, as a DJ.

Jason, both solo and with his singing partner, Ginger Curry, has performed on the air numerous times in the last several years as guests on Colonel Mike Kelsey's early morning radio show, as part of the Local Live feature, and on Saturday's Child, a monthly on-air and in-person concert event (with free coffee and bagels). 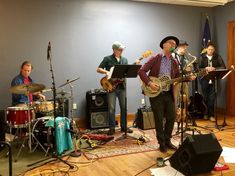 WFHB's live radio variety show, The Firehouse Follies, brings madcap hilarity and great music to the air (and as a live show!) four times a year. Written and produced by Col. Kelsey, the variety show is an energetic event with comedy, sound effects, special music guests, and a house band, the Firehouse Rounders, which Fickel often leads. Besides directing traffic for the excellent local musicians, Jason has sung songs by Roy Clark, Steve Goodman, Billy Riley, Hank Williams, and many more.

Since the early 1990's, WFHB has aired a blues radio show every Monday night, named, appropriately enough, Blue Monday. Founded by Dr. Bob Kissel and Ken Grooms, the show features a free-wheeling mix of contemporary and classic blues and all its subgenres. Special guests are a part of the fun -- Jason has hosted IU Professor M. Cooper Harriss for features on Zora Neale Hurston and Bob Dylan. Check out the calendar to find out when Jason is hosting next!